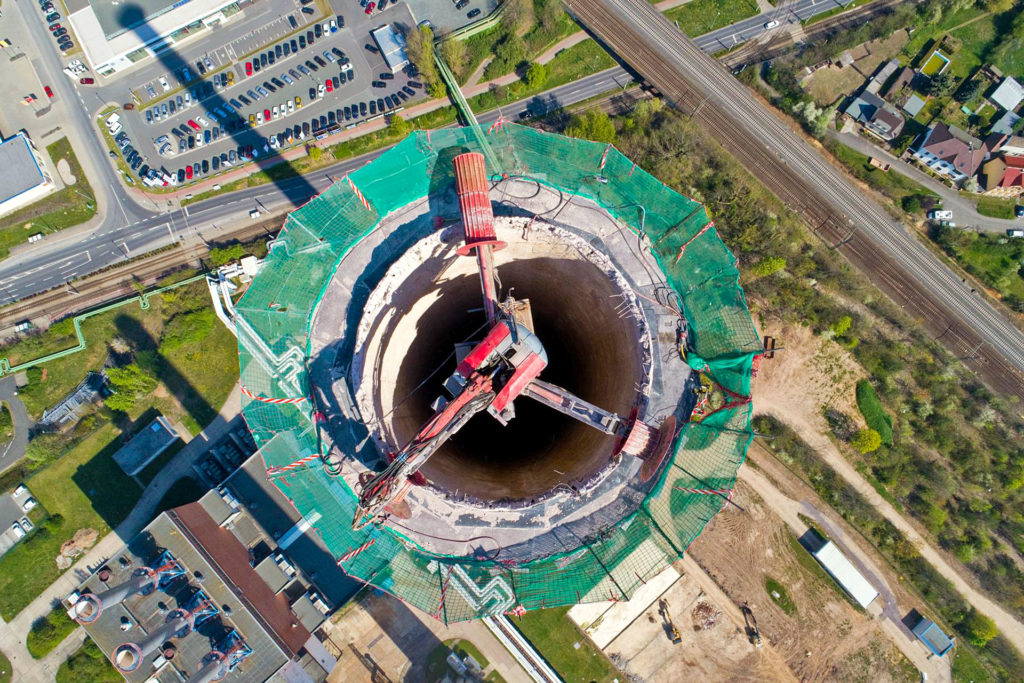 It is not only due to the advance of renewable energies that more and more chimneys and cooling towers are being demolished. It is also due to age or other safety issues, many facilities must be removed or rebuilt. Where blasting of the entire plant is not necessary or simply not possible, a wide variety of dismantling methods are used.

Bracket scaffolds are often used for the remediation and dismantling of tower-like structures, such as chimneys. They are not anchored to the structure, which can cause people and equipment to fall when the scaffolds are released and lowered. Hydraulic self-climbing scaffolding systems are designed to significantly minimize risk and thus greatly increase safety for dismantling work on structures such as chimneys.

New dismantling technologies on the rise

Over the past decades, MB Spezialabbruch has refined, developed and enhanced various methods for dismantling. For example, a frequently used machine for dismantling chimneys is the DriveBreaker. The Rounddownbreaker is used for the demolition of cooling towers. Depending on local conditions, sawing methods are increasingly being used. In these situations, the parts separated from the structure are subsequently lifted off via a mobile crane.

Scaffolds with hydraulic climbing devices are, in contrast to chimney scaffolds, anchored to the structure with systems approved by the building authorities. By defining load cases, reaction or anchor loads can be precisely determined. On this basis, the calculation and determination of the required anchor points are carried out.
The platforms are assembled on the ground. Then, the system, carrying the equipment, climbs up and back down. This way potential weak points in the structure can already be identified during climbing and secured by measures that increase structural safety.
It is also possible to arrange several levels on top of each other vertically. This results in a larger working area. A fast-running site elevator provides safe access to heights, complementing the overall high level of safety.
At all times, there is a form-fit connection between the scaffold and the structure. This, in combination with the working levels secured by a three-section side guard or closed walls, reduces the risk to employees many times over.

The news article from the trade journal “Bauportal” (issue 1/2021), which you can view as a PDF here, explains how self-climbing bracket scaffolds work in greater detail.

More articles and videos regarding demolition, dismantling and recycling can be found in our download area.